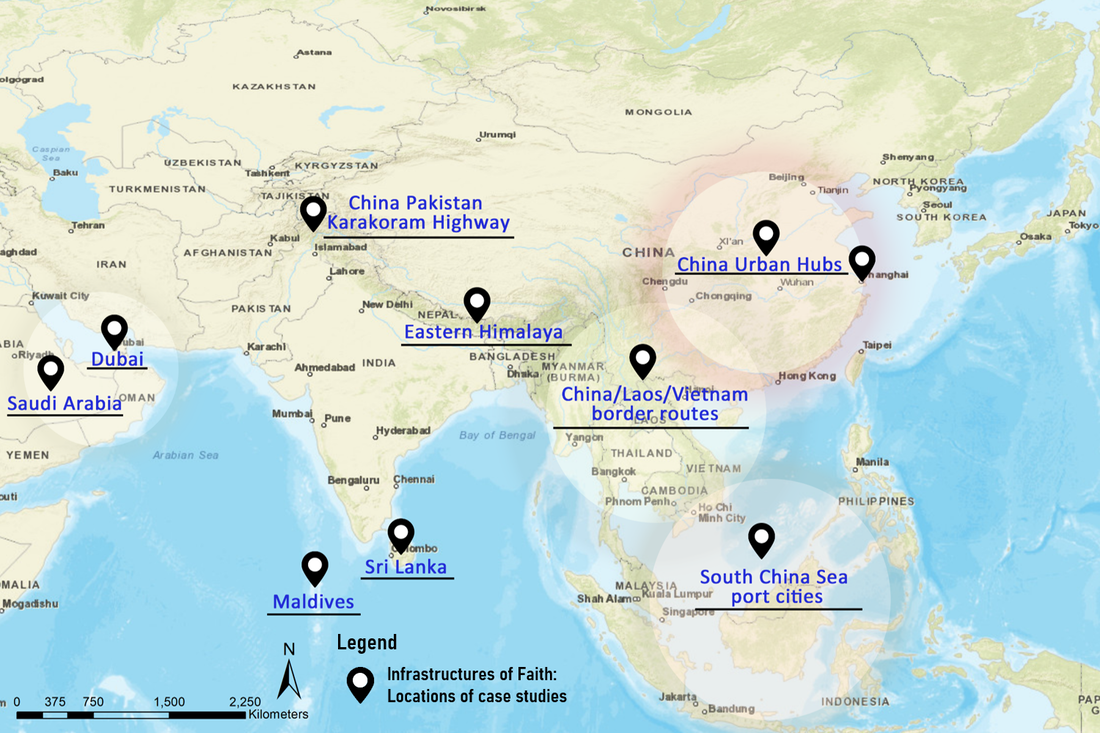 This research theme aims to place the case studies of the BRINFAITH project into a broader historical and geopolitical context through macro-level mapping. The work being undertaken falls into three types of mapping: historical mapping, geo-mapping and social media mapping. The historical mapping project involves situating the BRI in a history of spatial imaginaries of empire, cosmology and religion in Asia. The geo-mapping project involves the construction of an online map generating database on the BRI, collecting and superimposing multiple datasets on the BRI, including datasets related to religion. The social media mapping project involves mapping conversations on the BRI in social media, tracing the evolution of sentiment in different locations, identifying key opinion leaders and their networks and influence, and tracing the role of religious factors in the shaping of the online discourse.

Mapping the online discourse on the BRI in social media: general context and religious factors

This data mining project investigates the changing and contested narratives of the BRI in social media, focusing on sentimental and networking characteristics in online communication platforms. In an interim outcome, this work has firstly framed a...

The BRI Mapbox illustrates the spatial configuration between infrastructures and religious factors in the BRI region. This work maps out and correlates routes, borders, railroads, pipelines, ports and free trade zones with demographic, economic and...

Spacializing the BRI in the History of Asian Imperial Imaginations

This subproject situates the contemporary mapping of the BRI within the history of the spacial imagination of Asia, using the notion of “empire” as a conceptual tool to interrogate how the connecting and separation of places through networks and...

The group investigates infrastructures as locations for the negotiation of state power and flows of people and ideas. The team will focus specifically on the routes and borders between China, Pakistan and Afghanistan (Mostowlansky), Laos/Vietnam (Palmer, Estevez and Ngo), and India/the Himalayas (Halkias), as well as sea routes passing through the Sri Lanka (Woods) and the Maldives (Feener). Infrastructures of transportation and communication, but also of border demarcation and control, and of religious management and “deradicalization” (Liu) all contribute to shape and to transform the configuration of transnational religious networks, circulations and influences.

State-Building In Religious Society: A Comparative Study Of Religious Control In Belt And Road Countries

This research aims to study state policies of the religious control in Belt and Road countries in Central Asia, including China (Xinjiang province), Kazakhstan, Uzbekistan, Azerbaijan, and Tajikistan. Through a comparative study of the religious policies in these countries, this study seeks to reveal how the socialist or post-socialist...
Read More

Buddhism At The Borders Of Trade: Colonial And Post-Colonial Discourses On Trans-Himalayan Economic Networks And Connectivity

The expansion of international trade exerted and continues to exert considerable influence on the negotiation of nation-state borders and on the formation of cultural, social, and religious identities. While the relationship between religion and trade is undeniably complex and multifaceted, it has been suggested that commercial connectivity has...
Read More

Mapping Routes, Exchange, And Transformation Along The Borderlands Of Laos, China, And Vietnam: The Lanten Case

Political and, often, scholarly, boundaries divide Asia artificially into units, such as Southeast Asia and China. This modern division often contributes to masking ongoing processes of exchange and flow of persons, goods and ideas, and societies inhabiting the borderlands. Such is the case of the Lanten communities (Landian Yao or Yao Mun) who...
Read More

Paving Portions Of The ‘One Road’ Across The Indian Ocean: China’s Highway And Bridge Projects In The Republic Of The Maldives

Our work examines the work of constructing domestic overland roads and bridges within the Republic of the Maldives. This archipelago of atolls stretches across 90,000 square kilometres, but of that vast territory only less than 300 square kilometres is comprised of dry land. The country includes within its territorial waters two major deep-water...
Read More

Parallels And Paradoxes: New Religious Formations In Response To The BRI In Sri Lanka

Since the end of the civil war in 2009, Sri Lanka has attracted significant volumes of foreign investment. The vast majority of this investment has come from Chinese companies, which have committed loans amounting to over US$ 7 billion so far. Much of this investment has been used to finance large-scale infrastructure projects, including the...
Read More

This project investigates the intersection of Muslim humanitarian networks and Chinese-built infrastructures in Gilgit-Baltistan in northern Pakistan. The central aim of the project is to examine how at this meeting point of material and social entities that are often seen as disjointed new meanings emerge which alter the use and poetics of...
Read More

The strategies group examines how religious organizations and networks respond to the intensification of ties between China and other Asian nations by devising strategies of expansion or protection. This includes the intensification of competition between parallel and sometimes intersecting Christian and Islamic missionary movements (Li, Alsudairi). Christian and Muslim missionary projects have often been animated by fears that, without greater activity on their part, their competitors would succeed in making inroads into the country and convert it to Christianity/Islam. Meanwhile, the BRI is seen by many Chinese Christians as a divine plan, opening the road for the “back to Jerusalem” movement to send Chinese Christian missionaries to the middle East (Kang). Away from Christian-Muslim rivalries, other transnational religious networks are circulating along the intensifying links connecting China with other Asian nations, and Chinese temple networks along the South China sea have used the BRI to imagine an alternative, horizontal transnational alliance of local communities and temples (Dean). In Vietnam, some religious groups are mobilising their spiritual powers to resist Chinese influence (Ngo). And, with the growing popularity of yoga and new age-style body-mind-spirit practices among the urban middle classes, Indian new religious movements have spread to China, with a flow of gurus and trainers visiting China and Chinese students heading to India for advanced spiritual training (Iskra).

Sinophone Islam, as found in the Xibei (Xinjiang, Gansu, Qinghai and Ningxia), is characterized by sectarian (jiaopai) divisions among four groupings: the Qadim, the Sufi orders (menhuan), the Ikhwan, and the Salafis. With the exception of the latter, all of these sects adhere to a common doctrinal and legalistic tradition, shared by their...
Read More

Back To Jerusalem: The Missionary Movement Of The Chinese Protestant House Church

Chinese Protestant Christianity has grown exponentially in the last few decades. China has become a missionary-sending country at the same time as its political and economic importance in the world has grown. Many Chinese Christians believe that God has been calling on them to undertake the great mission of converting Muslims to Christianity. The...
Read More

Between A Rock And A Hard Place: Sinophobia And Religious Nationalist Sentiments In Vietnam

President Xi Jinping’s launch of the One Bell One Road Initiative (OBOR or BRI) was met with a negative reaction in the Vietnamese public sphere, although the speedy development of infrastructure connecting Vietnam and China would stimulate a number of trade sectors. The discussion focused on whether part of Vietnamese sovereignty should be given...
Read More

Alternative Networks In Southeast Asia: One Sea One Temple, And The City Of A Thousand Temples

In response to the slogan One Belt One Road a small temple in Sibu, Sarawak came up with an alternative slogan – One Sea One Temple. They then built a network of over 100 Dabogong (Tudigong) temples in ports along the South China Sea and into the Indian Ocean. This covers much of the same territory as the BRI’s “Maritime Silk Road.” But rather...
Read More

The recent military clashes between India and China in the Galwan Valley resulted in the Sino-Indian border heating up to levels unseen in recent years. Meanwhile, India continues to downplay China’s Belt and Road Initiative and refuses to sign a BRI Memorandum of Understanding. In June 2020, parallel to the reports on these tensions, Chinese...
Read More

This project studies the intricate and largely overlooked relationship between religious circulation, transportation routes and urban space in the historical context of state building and global connection in mid-eighteenth to mid-twentieth-century China. Focusing on the case of Christianity, it examines three cities and regions that have played...
Read More

Taking urban hubs as a focal point, the project examines the intricate yet largely overlooked relationship between religious circulation and urban space, exploring how the entanglement between religious practices, urban development and urban social changes involves transnational circulations both of religious cultures and policy discourses. Cities such as Hong Kong (Ho and Maarif), Guangzhou (Frankel) and Dubai (Wang), with their historical legacy and/or future-looking ambitions, continue to serve as strategic hubs that reinforce transnational religious exchange.

Inter-Asian Learning And Teaching Across The Belt And Road: In-Between Pakistani Madrasah And Chinese School

Driven by the steady increase of the Muslim population, ethnic Muslims in Hong Kong have been desperately seeking physical space for daily prayer and reciting Qur’an. Out of the strong religious aspiration, many small-scale madrasah (‘housques’) have been flourishing in many parts of Hong Kong in recent years. Based on my ongoing ethnographic...

Alhamdulillah (thanks to God), I made my hijrah (literally migration, from sinful to righteously pious -better- Muslim). I had intended to do so for years, but finally made it since last year. It's been a year now," said a niqab-ed Indonesian female Muslim worker in her monthly religious gathering at victoria Park of Hong Kong, in October 28th,...

China has gained more prominence in terms of its global health leadership during the coronavirus pandemic. The state dispatched medical teams and supplies to many Belt and Road countries in the last six months. Sinopharm, a large state-owned Chinese pharmaceutical company, established its first overseas COVID-19 vaccine clinical trial program in...

Alongstanding tradition among Hui Muslims attributes the arrival of Islam in China to a mission led by Saʿd ibn abī Waqqāṣ (ca. 595-ca.574), a relative of the Prophet Muhammad (570-632). Although the historicity of this story has been questioned to the point of incredulity, Saʿd ibn abī Waqqāṣ is associated with two important sites in Guangzhou –...